Tweets growing from 140 to 10k characters

Ever dreamt of posting a tweet that’s 10,000 characters long? Well your dreams may come true as the rumour on the block is that Twitter, the social media site, will ditch its 140-character per tweet limit, and raise it to a hefty 10,000 characters.

They way it could work would display tweets in their current form but if the user clicks within the tweet it will reveal the full longer piece of text/content. I'm personally not sure if this is a good or bad move. Although it would be great to have a bit more space to write in and messages won't look so cryptic for the casual user.

Currently there are no confirmed plans or even a release date for this new change to the Twitter tweet length but their chief executive, Jack Dorsey, has posted a long-form tweet that outlined plans to look at the current character limit, so he seems pretty OK with it. (See the long form tweet by Jack Dorsey) 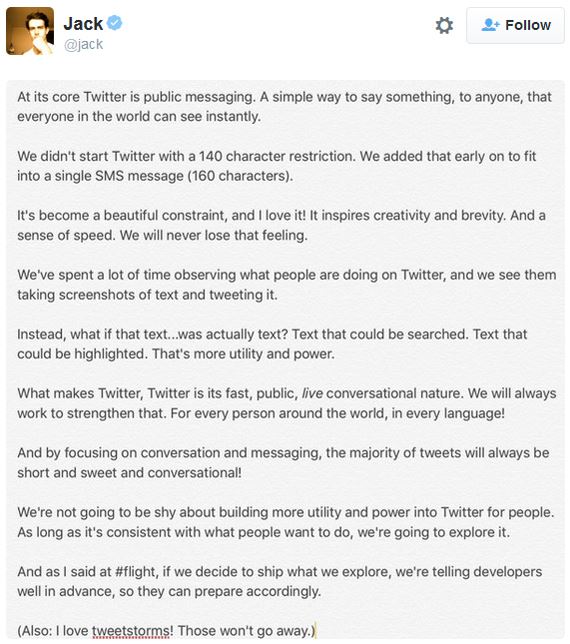 Changing the face of online PR?

I wonder if Twitter is trying to challenge other flexible social networking sites, i.e. Facebook? If the rumours are right Twitter may become a very different social media platform to the one it currently is. I guess we’ll have to wait and see.

As with all applications that allows users to do more, Twitter will have to consider tackling the risk of people, companies and malicious users spamming the online PR site with long tweets of marketing content, irrelevant information or abuse.

Twitter cut the 140-character limit to its direct messaging service and raised it to 10,000 characters in August 2015, so it probably comes as no surprise that they would be considering allowing longer tweets too. Time will tell how effective and welcome these possible changes will be.

A tweet can be (as of September 2019) anything up to 280 characters. And as a general rule of thumb, 70-110 characters is the sweet spot for how long your tweet should be. Analyse the best time to tweet - this could be around 3pm in the afternoon on weekdays, but it all depends on your audience and target market.